High Court Hearing Arguments On Case That Could Redefine “Sex” 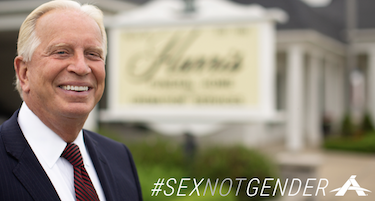 The U.S. Supreme Court will hear oral arguments today in the case of R.G. & G.R. Harris Funeral Homes v. Equal Employment Opportunity Commission(EEOC). This case is a crucial one not only for the owners of Harris Funeral Homes, but for all Americans concerned about the potential redefinition of the meaning of “sex.”

A lower court has “effectively redefined the word ‘sex’ in federal law to mean ‘gender identity,’ punishing Harris Funeral Homes for relying on existing laws,” according to Alliance Defending Freedom, which is representing Harris Funeral Homes. While being punished for following the existing law is truly unjust, such injustice would only be magnified for women, parents, doctors, and many more Americans if the U.S. Supreme Court (SCOTUS) chooses to uphold the lower court’s decision to redefine “sex” in federal law.

As NC Family shared with you last month, this case originated when a male funeral director—who identifies as female—informed Harris Funeral Homes that he would no long abide by the company’s dress code and would begin dressing as a woman. When owner Tom Rost did not agree to that, the employee complained to the EEOC, which filed a lawsuit against Harris Funeral Homes for sex-based discrimination. Should SCOTUS agree to change the definition of “sex” in federal law to mean “gender identity,” the ripple effects will be enormous, especially for women and girls. Redefining “discrimination based on sex” to mean “discrimination based on gender identity” will undermine equal opportunities for women—especially in sports—endanger bodily privacy rights of women, and violate freedom of speech, just to name a few.

Alliance Defending Freedom has provided multiple resources for those who want to learn more about this case and who want to support Harris Funeral Homes. There is a one-sheet case summary that you can read and share with your friends. As this case is getting national attention, it is important to differentiate the facts from the political rancor. Also, today from 9am to 1pm, there will be a “Tweet Fest,” and ADF has provided a variety of messages and images you can send out on Twitter or share on Facebook. Finally, if you have not already, be sure to check out the friend-of-the-court brief that NC Family co-signed with multiple other family policy organizations. This brief thoroughly details our opposition, on behalf of all North Carolina families, to redefining the meaning of “sex.”