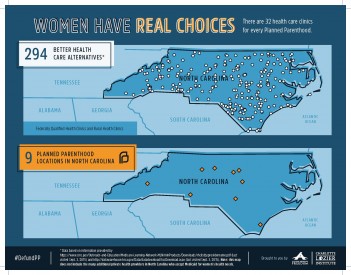 In the same year that Planned Parenthood reported $127 Million in profit and $1.4 Billion in net assets, the world’s largest abortion provider also raked in $528 Million in state and federal funding—money taken from the pockets of hard-working Americans through our taxes. Considering all that has come to light with respect to the operation of Planned Parenthood in recent months, American citizens and lawmakers must consider whether half a billion dollars in public money should continue to be spent this way or be redirected to more appropriate—and life-affirming—health services.

Planned Parenthood also serves far fewer communities than other Health Centers. Consider that the $528 million in federal tax dollars stuffed into Planned Parenthood’s pockets every year goes to support a mere 665 locations nationwide. There are 9 Planned Parenthood clinics in North Carolina, located primarily in the central third of the state. Imagine what those dollars could do if they were directed instead toward the more than 187,000 Health Centers that are registered for Medicare and Medicaid services. North Carolina alone has 34 of these Health Centers or similar centers in 66 counties that operate nearly 180 clinical sites and served nearly 470,000 patients in 2013.

It is time for Congress to follow North Carolina’s lead and ensure that public dollars for health services go to organizations that provide the most comprehensive care for the largest number of Americans. The U.S. government, whose founding documents loudly proclaim the importance of defending “life, liberty, and the pursuit of happiness,” should not be funding organizations that make it their mission to take human life. Our government should not be reaching into our pockets week after week to prop up a private organization that capitalizes on the death of millions of unborn babies, while providing so few health services that women really need.