Death of Justice Scalia is a Huge Loss 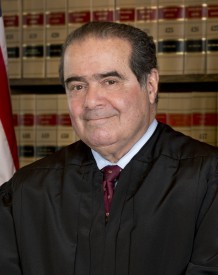 This weekend, America lost a truly supreme jurist who was a stalwart defender of the sanctity of human life, traditional marriage, religious liberty, and the separation of powers. Supreme Court Justice Antonin Scalia reportedly died from natural causes Saturday morning at the age of 79. Appointed to the Court in 1986 by President Ronald Reagan, Scalia was an unwavering supporter of the Constitution and the belief that it should be interpreted through the lens of its original meaning. He had one of America’s top legal minds and a colorful personality, which often shined through in his legal opinions, whether written as part of the majority or in dissent. Above all, he was a devout follower of Jesus Christ and encouraged fellow believers to “Have the courage to have your wisdom regarded as stupidity. Be fools for Christ. And have the courage to suffer the contempt of the sophisticated world.”

In many cases, the death of Justice Scalia leaves the Court in an ideological deadlock, which could have an immediate impact on North Carolina. Earlier this month, federal judges ruled that two of North Carolina’s congressional districts are unconstitutional, a decision that could force state lawmakers to redraw congressional district lines and delay the March 15 primary, despite the fact that absentee voting by mail has already begun. The State is appealing the decision and has asked the Supreme Court to stay the ruling and allow the appeal to be heard after the March primary. It was believed by many, prior to Scalia’s death, that the Court would honor the state’s request and delay the impact of the ruling. It is now believed by some legal scholars that the Court will be deadlocked in a 4-4 tie on most issues. In the case of a Supreme Court tie, the ruling of the lower court stands. For North Carolina that could mean delaying the March 15 primary elections until state lawmakers redraw the congressional district lines.

The appointment of Scalia’s replacement is also up in the air. U.S. Senate Majority leader Mitch McConnell has pledged to keep the High Court seat open until a new president is elected.  If President Obama is unable to get his nominee through the Senate confirmation process, it could mean a plethora of tie votes occurring this year, which is of significance for those who are concerned about protecting religious liberty and the sanctity of human life.  The Court is scheduled to hear cases pertaining to tougher restrictions on abortion clinics, religious freedom, and the “contraceptive mandate” created under the Affordable Care Act for religious non-profits, among other matters.

The fact that Justice Scalia’s death throws both state and national issues into such uncertainty speaks to the important role he played on the High Court. He was a legal giant who will be missed by the generations that were impacted by his sharp mind and quick wit. It also speaks to the importance of the current presidential election, as the winner may well select his successor.