Dr. Thomas Lickona, a developmental psychologist and professor of education at the State University of New York at Cortland, speaks about strategies for battling pornography in our homes and classrooms. 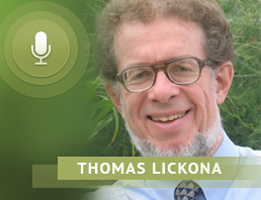 INTRODUCTION: Thanks for joining us this week for Family Policy Matters. I’m Traci DeVette Griggs, Director of Communications, in this week for NC Family President John Rustin. We are going to be discussing an increasingly important topic for parents and educators today: strategies for battling pornography in our homes and classrooms. Our guest today is Dr. Thomas Lickona, a developmental psychologist and professor of education at the State University of New York at Cortland, where he serves as director of the Center for the Fourth and Fifth R’s (which stand for Respect and Responsibility).

Dr. Lickona has spent his career helping families and schools foster good character in young people, through writing and speaking to teachers, parents, religious educators, and other groups concerned about the character development of young people around the world.

Parents, please be aware that portions of today’s program may not be suitable for younger ears.

THOMAS LICKONA: Thanks for inviting me!

TRACI GRIGGS: First of all, how big of a problem is pornography use among our students? Is it really something we need to worry about in elementary and middle schools?

Sometimes a particular story brings this home even more dramatically and compellingly. For example, one six-year-old boy was molested by his foster sister, which began a premature interest in sex. As a pre-teen, he started with Internet pornography. It wasn’t until he was 17 that his parents found out that he had been molesting his younger siblings for many years while hiding his pornography addiction. So even at younger ages than the average of 11, kids can get pulled into this terrible problem.

TRACI GRIGGS: That is terrible. Dr. Lickona, what do we know about how pornography exposure and use affects the psychological and emotional development of children and adolescents, both in the short-term and in the long-term?

THOMAS LICKONA: One of the worst effects is that it presents a very distorted picture of human sexuality, which in turn, distorts the normal sexual development of young people who consume it. In pornography, deviant and abusive sex is the norm. One study, for example, of the most popular pornographic videos found that 9 out of 10 scenes showed a woman being brutally humiliated, hit, beaten, degraded in various ways, and always the victim was made to seem not to mind, or even to look happy about it. Whereas, actual interviews of people who have quit the pornography industry say that they are threatened, intimidated in various ways, pressured to engage in these behaviors. Pornography is abusive sex. It gives a very distorted relationship. You have on your own website actually an interview with Michelle Cretella, the president of the American College of Pediatricians, who cited the very important research review that they released in October 2015, entitled, “The Impact of Pornography on Children.” Just a few of the findings that the American College of Pediatricians highlighted: children exposed to pornography, for example, are more likely to sexually assault their peers. In young people, the consumption of porn is linked to increased rates of depression, anxiety, violent behavior, early sexual activity and sexual promiscuity, high rates of teen pregnancy. Teenage sexting has been linked with using pornography. College students who view pornography for six weeks became more interested in extreme forms, considered rape less of a crime, were more accepting of sexual infidelity, and expressed a decreased interest in getting married or having children. Studies of brains and how they are affected by pornography consumption show that there’s reduced brain volume, lower functional connectivity, and neural changes that are actually quite similar to those seen in brains of those addicted to cocaine, alcohol or meth.

TRACI GRIGGS: It’s very sad to think that young children might have their view of the opposite sex, and sex and marriage in general, swayed by just some accidental exposures to pornography. So, if that’s the case, when should parents begin talking about this topic with their children so that they all feel prepared to deal with unforeseen exposure to pornography?

THOMAS LICKONA: The earlier the better. But, I think many parents feel a dilemma here because there’s a natural tendency to value children’s innocence, to want to protect them from the worst things that are out there in the world, and to delay talking about the really awful stuff like pornography. Even if you have the birds and the bees talk, you know by 7 or 8 or 9, you might hold off on discussing pornography until say 12 or 13, early teens. But really, that runs the risk that your children are going to be exposed to it by a peer or accidentally on the Internet and then you’ll be coming reactively instead of proactively. So, I really strongly recommend to parents a book, which your website has recommended, called “Good Pictures Bad Pictures: Porn-proofing Today’s Young Kids” by Kristen Jenson and Gail Poyner. It’s very gentle, very tasteful, very concrete, very helpful book, which I think, frankly, every parent should make use of by as early as age seven.

TRACI GRIGGS: Dr. Lickona, what is the importance of teaching students to think critically, specifically about media, and what can parents and teachers do to help students with that?

THOMAS LICKONA: A larger challenge here is to really discuss pornography within a bigger project, whether it’s Character Education class in school or the family setting, which is, what are the right uses of media? How do we use media in a positive way that helps us build good habits and positive future? How do we avoid using media in a negative way. The first thing is to just ask, “Is this media good for me or bad for me? Who’s producing it? What are the messages?” And then the second question is, “What are the effects on me? And what are my current media habits? How do they affect the person I’m becoming, my values, my beliefs, my attitudes, my character, how I spend my time? Does it make me a better person or not?” And then to make whatever changes are needed in that context. So really, parents need a broad approach to regulating media in a family. A lot of cases, we’re not nearly proactive enough. So, I encourage parents to sit down and get across a very big concept: that use of the media in our family is a privilege, not a right. And that privilege has to be exercised with the approval and permission of parents in a way that’s consistent with our family values. So, for any particular TV show, movie, magazine, music CD, video game, Internet site, social media, here’s the question: “Is it consistent with what we value and believe as a family?” And then, you work out a kind of media contract as a family—an agreement—that will regulate how you use the media as a whole. And that would certainly include something about pornography, where you expect that you’re going to be blocking, using Internet screening, but the most important control is your child’s conscience, because kids are digitally savvy. If they want to get around things that we put up as Internet blocks, they can figure out a way to do it. We say we’ve done this as a precaution and a help, but really, the most important regulation is the one of their conscience. So, you try to create a partnership really, parents and children working together to create a certain family culture which includes a sense of mission: what kind of family you want to be. And that, in turn, includes media, to help with the fulfillment of that mission, not to undermine it.

TRACI GRIGGS: So what about schools? What can schools do to try to help protect students from pornography exposure.

THOMAS LICKONA: Parents and teachers need to be articulate in giving kids very specific reasons to avoid letting this into their hearts, minds or souls. I’ve offered parents and teachers a list of seven different kinds of reasons and you can choose from among them according to your moral beliefs, your religious convictions. So, it’s not as if everybody has to use all seven of these reasons but they, at least, give people a sense of how to articulate the reasons not to become involved in this. And many times, adults stumble in this area and find it difficult to find the words to say. The first reason is that pornography treats people as objects to be used; it doesn’t respect them. And every person has human dignity that demands respect. Second is that sexual intimacy is meant to express love between people. Porn separates sex from love. It gives a very false picture of human sexuality. Third is that the mind stores everything. Once you let these images in, it may be very difficult or impossible to get rid of them even if you want to. The forth reason is that pornography changes the brain. Just like a drug, it can quickly become addictive and take over your life. The fifth is that for boys, it may commonly be accompanied by another bad habit, masturbation, something that’s also hard to break. And both the pornography habit and masturbation will reduce your self-control and reduce your self-respect. If you carry either or both of these habits into marriage, that can cause problems between husbands and wives. And finally, from a faith perspective, how does this relate to God’s plan for the gift of our sexuality? So, those are some very specific reasons that, taken together, will help a young person resist the temptation and have a solid basis for making the right decision.

TRACI GRIGGS: So what do we do—what do parents do, what do teachers do—if they discover that their child or their student has been mired in this habit of pornography? What are some steps they can take to get out of that?

THOMAS LICKONA: We need to listen, first of all, calmly to what has happened—the facts of the matter. It may have been accidental exposure, it may have been peer group where this is going on daily, just to find out how it came about. And then, explain lovingly, but clearly, why pornography is seriously wrong for the reasons that I have just described. And then, how to avoid it in the future, work out a specific plan: If somebody shows it to you, what do you say, walk away. Some kids, if they have anxiety or disgust or anger or a combination of emotions as a result of their involvement, let me just mention a couple of other resources that families may find helpful.

TRACI GRIGGS: We would love that, thank you.

THOMAS LICKONA: One is the website pornproofkids.org. That website was created by the two authors who wrote the book “Good Pictures Bad Pictures.” There’s a website that’s very helpful for adults by a Catholic psychiatrist at Harvard University’s Medical School, called overcomingcravings.com. And the psychiatrist, Dr. Kevin Majeres, has seven virtue-based modules that adults have been able to use to break free of various addictions whether pornography, alcohol, drugs and so on. And mercatornet.com is an online magazine that has run a number of articles on pornography, as well as a whole range of social and moral issues that are consistent with a Christian worldview. So, those are some other resources that people may find helpful.

TRACI GRIGGS: We’ll check those out. And we just thank you again for all the good work that you do to help parents and teachers raise virtuous children and battle this scourge of pornography among our young people.