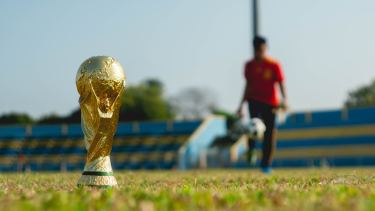 The World Cup has given soccer fans some riveting performances this year! While I was personally rooting for the US men’s national team, I was not surprised when the US was eliminated by the talented Netherlands team, which was subsequently taken out by overall winner Argentina.

During the Dutch team’s time in the World Cup, commentators often referred to the remarkable story behind two particular players. They noted that Virgil van Dijk and Memphis Depay, starting center back and forward for the team, both had their first names printed on their jerseys. The commentators noted these men grew up in families that had been abandoned by their fathers, and that Virgil and Memphis did not want to carry the names of those men on their backs.

As a young man who grew up with an absentee father, I appreciated these players using their public platform in this way, and I wanted to share how these stories speak to the lasting impact of fatherlessness.

Football Stars With a Rough Start

FC Barcelona star Memphis was born to a Ghanaian father and Norwegian mother in Moordrecht, a small village in South Holland. Memphis got involved in football (soccer) early on, as there was not much else to do in his village. It was also early on that his father walked out on him and his mother when Memphis was just four years old, and they were left with very little. This experience, undoubtedly, was a major motivating factor for his eventual football success.

While his childhood coaches classified him as an angry kid (probably pent up from his father’s abandonment), they did not give up on him. Instead, they provided Memphis with a life coach, and he continued to excel at his craft in football until he became a professional. Shortly thereafter, he shed his father’s name to eliminate any remaining ties they had.

Virgil, who is from Liverpool, has a similar story.

The Role of a Father

These experiences illustrate the traumatic effects of a parent abandoning their child. The impacts can be long-lasting and often permanent, potentially altering one’s ability to form social relationships and trust others. While Virgil and Memphis have thrived in the world of professional sports, many more abandoned boys have turned into bitter and broken men. This is especially true when a father abandons his son, since fathers bear the responsibility of teaching their sons how to be a man.

With a measure of transparency and vulnerability, I can say this has been the case for me. Without my father, I was forced to learn “manliness” from the culture, a place where that word has slowly lost its true meaning. Thankfully, I have had people step up to be father figures in my life in various stages, which has been nothing less than a lifeline.

In an age where “toxic masculinity” is becoming the main association people have with the notion of manliness, it’s more important than ever for fathers to live into their parental duty of properly training their sons. It’s also important for men who are not fathers – i.e. brothers, uncles, cousins, etc. – to step up and fill in the gaps when fathers are absent.

Nothing here is meant to overlook the role of mothers, or undervalue their importance within the family. It’s just that fathers have a unique and special place in the lives of their children, and their contribution to the family structure is immeasurable and irreplaceable. All in all, men should live into their duty of fatherhood, so that the life-long trauma and painful effects of abandonment on their children can be avoided. Also, people like Memphis and Virgil should continue to use their platforms to speak out about the negative impacts of fatherlessness on massive stages like the World Cup!

After all, their boldness prompted me to speak about it to you—and I think that’s a good thing!