What If Everyone Worked Harder To Love Each Other? Part 2

This week, “Family Policy Matters” features the second part of a keynote address on the “Seven Traits of Love” that Dr. Gary Chapman, marriage counselor and author of The Five Love Languages, gave at the North Carolina Family Policy Council’s Major Speakers dinner event in Raleigh in April 2016. 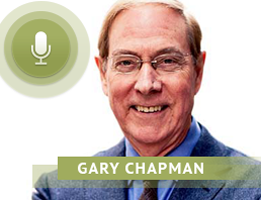 “Family Policy Matters”
Transcript: What If Everyone Worked Harder To Love Each Other? Part 2

INTRODUCTION: This week, we are pleased to bring you part two of a presentation on the seven character traits of love that Dr. Gary Chapman gave at the North Carolina Family Policy Council’s Major Speakers dinner event in Raleigh in April 2016.

JOHN RUSTIN: Dr. Gary Chapman is the author of the best-selling book, The Five Love Languages, and he speaks to thousands of couples nationwide through his weekend marriage conferences. He also hosts a nationally syndicated radio show program, and is senior associate pastor at Calvary Baptist Church in Winston-Salem, NC.

We will be picking back up where Dr. Chapman left off last week, as we shares the five remaining traits of love. We hope you enjoy the remainder of Dr. Chapman’s powerful presentation!

GARY CHAPMAN: Number three is forgiveness. Loving people forgive people. I call this finding freedom from the grip of anger. We get angry when people treat us unfairly. God gets angry too, every day. Ephesians 4:26 says, “Being angry, sin not.” It’s not a sin to feel anger, but it’s how we respond to anger. So forgiveness is being willing to forgive people when they apologize. You see Ephesians 4:32 says that we are to forgive others in the same way God forgives us. How does God forgive us? If we confess our sins, God forgives us. So if people apologize, we should be willing to forgive them, always willing to forgive them, whatever they’ve done. If they don’t apologize, the Bible’s very clear, you confront them. Luke 17:3 Jesus says, if your brother sins against you, then go tell him, and if he repents, forgive him. So if they don’t come apologizing, we go confront them and give them a chance to repent. And then if they don’t apologize after you’ve confronted them three times, Matthew says you treat them like a pagan, which means you pray for them, and you release them to God. That’s what Peter said about Jesus. He said when people reviled again him, he did not revile back, but he committed himself to Him who judges righteously. You turn the person over to God, and you release them to God. You put them in good hands because He’s not only a just God, but He’s also a loving God. If they ever repent, God will forgive them and you can forgive them. And in the meantime you release them, you don’t allow the anger to live inside of you. Romans 12:19 says, “Don’t seek revenge because vengeance is mine. I will repay, says the Lord.”

Number four is courtesy. We often speak of common courtesies. Most of our parents taught us some common courtesies. When I was writing the book, I just wrote down some of the ones my mom and dad taught me. See if any of these sound familiar to you. When someone gives you a compliment or a gift, always say thank you. Don’t talk with food in your mouth (I had trouble with that tonight). Ask permission before playing with your sister’s toys. Don’t take the biggest piece of chicken. When it comes to food, taste it before you reject it, and then say, “I don’t care for that, thank you.” Never enter someone’s room without knocking, and then say, “May I come in, please?” Do your chores before you play ball. When you see your mother and father doing something, always ask, “May I help you?” Wait your turn to ride the scooter. And, when aunt Zelda comes, always meet her at the door with a hug. I could go on. Some of you had parents who taught you some common courtesies. My wife and I made us a list of common courtesies of how to treat each other, one of which is, “I don’t speak for her, and she doesn’t speak for me.” I learned that the hard way.

This word courtesy is really far more than those common courtesies. This word comes from a Greek word—two words actually—one is the “mind” and the other is the word for “friend.” To be courteous is to be friendly-minded. It’s to treat other people as though they were your friend. You’re in the car, and you pull into a parking lot that’s packed, but you see a spot, and so you’re headed for the spot, but on the other side you see a car coming round the corner, what do you do? Tooooo, got it! But if you consider that person in the other car to be your friend, what would you do? Chances are, you’d give them the parking place. Or, how about the way you talk to a telemarketer who calls you trying to sell you vinyl siding for your brick house? You ever felt sorry for telemarketers? If you considered the telemarketer your friend, it might sound something like, “You know I appreciate you calling. I’m so glad you’ve got a job, and I hope you do well tonight. I don’t need the vinyl siding because I’ve got a brick house, but I’m glad you got a job.”

Number five is humility. Stepping down so others can step up. This has to come from the heart. This comes from the example of Jesus. Philippians 2 says, “Do nothing out of selfish ambition and vane conceit, but in humility consider others better than yourselves. Each of you should look out not only for your own interest but also for the interest of others. Your attitude should be the same as that of Christ Jesus who being in very nature God, did not consider equality with God something to be held on to but he made himself nothing. Taking the very nature of a servant, being made in human likeness and being found in the appearance of a man who humbled himself even further and became obedient to death, even death on a cross.” He stepped down so that we could step up and have eternal life. He’s our example.

Three realities produce humility. If you understand these three things, there’s no place for pride. The first is that I have nothing that I have not received. The second is that my knowledge of the universe is limited. Sir Isaac Newton who was one of the wisest among us, once said, “I feel like at times I’m like a child walking on the beach, now and then finding a shell that’s unique, while all the ocean of knowledge lies before me undiscovered.” All of us know a good bit about some things. I’ve been working relationships now for longer than I can remember, and I think I know some things about relationships. But I can tell you this, there are thousands of things that I know very little about, and that’s true of all of us. And thirdly is that I’m totally dependent upon God even for my next breath. So if you understand those realities, there’s no place for pride.

Number six is generosity, loving people will be generous people, giving their time, giving their money, giving their abilities to help others. I was visiting a friend of mine near Detroit that I’d known for a good long while, and I was speaking in Detroit and he asked me if I would spend the night at his place with his wife and family. So that night I was sharing with him that I had just challenged our church the Sunday before to give $500,000 to missions in our Christmas missions offering. And we talked about it a bit, and he said Gary, “Did I ever tell you my giving story?” I said “No.” He said, “My wife and I got married, he said we were both Christians before we got married, we both tithed out income to God, so when we got married it was no big deal for us to give 10% of our money to God, and he said so we did. And I started a little business that year, and he said God blessed my business, and at the end of the year I said to my wife, ‘Honey God has blessed us and I’ve just been thinking that maybe we ought to raise our giving to 11%, since things have gone so well.” And she said, “Fine honey, I’m happy to do that.” He said, “Dr. Chapman we’ve been doing it every year since then, every year we raise it 1%.” I [asked], “How long you been married?” He smiled and said, “49 years.” You see at that juncture he was giving 59% of all of his income to God. God has used him in many places.

One thing to help you grow in generosity might be to make a list of all the things that have been given to you, from your parents and other people through the years, and supremely from God, and you reflect on what you’ve received. It motivates you to give.

Number seven is honesty—caring enough to tell the truth. A loving person will not lie to get ahead. In a marriage, a lot of people lie to protect themselves. One young lady when we asked her could she give us the name of someone in her family who is a loving person, she said immediately, “My grandmother.” And when we asked why she said, “Because she always tells me the truth, even when I don’t want to hear it. I know she does it for my good.” You see we’re called upon to speak the truth in love. We speak the truth in love; it’s not getting stuff off your chest—that’s not the thing. You’re speaking truth that you think will be helpful to the other person. How do you build honesty into your life? Maybe at the end of any day, just take a moment and reflect on, “Did I say anything today that wasn’t quite true?” And if you find anything you ask yourself, “Did it give someone the wrong impression, did I deceive someone?” And if so, go apologize for it.

Why would we want to be a lover? Jesus said, “This is the way they will know that you belong to me, by the way you love each other.” When I was writing the book, I had the thought, “Does love really stand a chance in our culture?” You see the sociologists call our culture the “argument” culture, and now we’ve gone beyond that, now we try to destroy everyone who disagrees with us. And my conclusion was, love is our only chance. It’s not does love stand a chance; love is our only chance. You know, we’re told that 70 percent of the people in this country claim to be Christians, at least they claim it as their religion. Now, we know not all of them are Christians. But what if those of us who are Christians actually became lovers?

I hope that you are challenged along with me. Had you asked me before I started writing this book and working on this project, if I were a loving person, I think I would have said, “I think so, I try to be. I hope I am.” But when dug into it, I realized that I had a whole lot of room for growth. I’m still on the journey. I’m hoping God will use this book the challenge a whole lot of people to get on the journey and let’s move toward becoming a more loving person. Thank you.