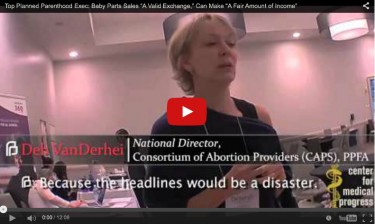 This article is Part Two of a Point Of View (POV) series by NCFamily exploring the inhumane practices of the abortion industry brought to light by recent undercover videos of Planned Parenthood.

“I can’t watch this, as I can never unwatch it.”

This Facebook comment demonstrates the angst of many pro-life Americans when confronted with how to respond to the video series that unveils Planned Parenthood’s practice of harvesting and selling the organs and body parts of aborted babies. The nine undercover videos that the Center for Medical Progress has released so far include callous, heart-breaking discussions and painfully raw images of what goes on inside many abortion clinics. Many Americans on both sides of the abortion issue recognize the invaluable role these harsh audio and visual realities can play in changing hearts, minds, and public policy related to the rights of the unborn. Still, only about half of Americans, even self-proclaimed pro-life Americans, have watched a portion of any of the videos.

Many of us empathize with the Facebook commenter above. We worry that the videos will trigger sensitivity or anxiety, sometimes connected to personal issues like infertility, past abortions, or miscarriages. Expectant mothers, like myself, may find these videos especially difficult to watch.

Still, we must recognize that these videos are an important part of sharing the pro-life message and helping more men and women see the value of choosing life over death for their children. Ultimately, we hope to change attitudes and laws in a way that reflects this value, but our success depends upon a plethora of approaches—personal relationships, tangible outreach and resources, public demonstrations, strong political leaders, better laws, and, yes, even graphic photos or videos depicting the brutal realities of abortion. Information and reality are clearly key tools in this fight, as demonstrated by the increasing number of Americans who identify as pro-life and who attribute their perception of unborn life to scientific advances like ultrasounds that give us a real-life look into the world of an unborn child.

The debate over whether images of aborted children should be publicly displayed has been a part of this national conversation for decades, and the opinions are wide-ranging. Some hearts are closed—due to pain, due to guilt, due to blindness—and only a sledgehammer of reality can put a chip in those walls. Still others are open, but the sight of such evil shakes them to the core. We should have sincere sympathy and understanding for the pain such images may cause children, abortion survivors, wounded post-abortive mothers and fathers, infertile couples, and pregnant mothers; but we also must resist the urge to turn a blind eye to the reality of what is taking place around us.

My heart understands. Currently in the second trimester of my third pregnancy, it is difficult for me to watch these videos, because many show children the same age and size as the one I am carrying. These videos are not going to change my heart or mind on the ethical and legal failures of abortion; I remain staunchly pro-life. Still, as one of my friends aptly put it, “I felt that as a ‘cradle’ pro-lifer I had become numbed over the years to the true horror of the abortion industry. I think, ‘How can I serve and pray for those women and babies if I don’t know the depths of the evil they face?’”

So, like many others, when I couldn’t bear to watch the videos, I closed my eyes and listened to the callous conversations or read transcripts of the videos, so that I could write about it, talk intelligently about it, pray about it, DO SOMETHING about it!

Concerned Women for America has prepared summaries of each video, specifically designed for those who cannot bear to watch the video footage, but who recognize the importance of knowing what they contain.

It may not be that every single American needs to watch all or even one of these videos, but I believe every single American has a responsibility to know what the videos show and say. Our taxes are helping to fund Planned Parenthood, so we need to continue sharing these videos with others. We need to know the truth. One local pregnancy center leader powerfully summed it up, “We need to look evil in the face over and over to have the resolve to fight to end it.”

Read Part One of this series, The Problem with Selling Baby Parts.