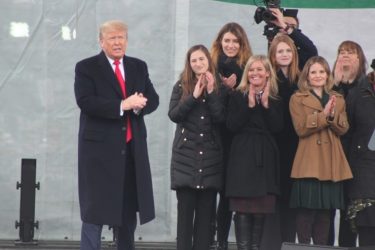 “We’re here for a very simple reason: to defend the right of every child, born and unborn, to fulfill their God-given potential,” said the President. “With determined hope, we look forward to all of the blessings that will come from the beauty, talent, purpose, nobility, and grace of every American child.”

President Trump detailed his administration’s pro-life and pro-family policies multiple times during his remarks. One such pro-life action was taken Friday morning, just before he began speaking. The Office for Civil Rights (OCR) of the US Department of Health and Human Services (HHS) announced that it has concluded an investigation and issued a notice of violation to the State of California. According to OCR’s press release, California has been discriminating “against health care plans and issuers that did, or would, limit or exclude abortion coverage…” OCR informed California that, “it cannot impose universal abortion coverage mandates on health insurance plans and issuers in violation of federal conscience laws.” California now has thirty days to change its discriminatory conduct, or the state could lose certain federal HHS funding.

Shortly after OCR issued the notice to California, NC Family joined a number of other pro-life Americans on a public HHS conference call where OCR Director Roger Severino shared about the notice of violation given to California. Severino applauded this administration’s stance on defending life. “No one in America should be forced to pay for or cover other people’s abortions,” he said. “We are putting California on notice that it must stop forcing people of good will to subsidize the taking of human life, not only because it’s the moral thing to do, but because it’s the law.”