Taking A Stand For Life 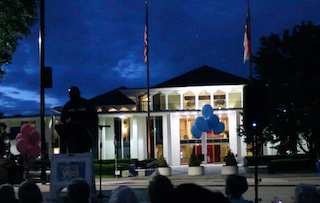 Culwell shared that she was placed for adoption at birth and later reunited with her biological mother. She came to find out that her biological mother had gone to an abortion clinic to end her pregnancy. Following what the clinic told her was a successful abortion, Claire’s biological mother later determined she was still pregnant. She found out the abortionist had performed a dismemberment abortion on Claire’s twin but failed to recognize that there were two unborn babies in the womb instead of just one. Claire was born months later. “When I found out this was my story, I never planned to share it,” Culwell said. “Who would want to hear something crazy like that? Who would believe me? But I knew that God had given this story to me, and over time, I became proud that this was my story.”

NC Family President John L. Rustin recognized the legislators who were present at the rally and thanked them for their support of SB 359 – Born Alive Abortion Survivors Protection Act. He then called on those in the audience to contact their State House members to urge them to override Governor Roy Cooper’s veto of the bill. Rustin also urged everyone in attendance to contact their legislators in both the State House and State Senate to urge support for The Pain Capable Unborn Child Protection Act (HB 603/SB 547), and A Second Chance for Life (HB 53/SB 52), also known as the Abortion Pill Reversal bill.

A special thanks to Tami Fitzgerald and the North Carolina Values Coalition for organizing the rally. Also speaking were:

Thank you for standing with us and fighting to protect innocent human life.