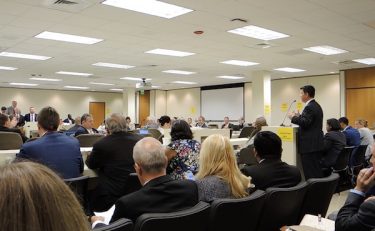 The Judiciary Committee of the N.C. House rejected a bill on Wednesday that would establish a statewide Gaming Commission and legalize Internet-based Daily Fantasy Sports gambling in North Carolina. By a 16-12 margin, the committee voted down HB 929–Gaming Commission, but the bill could return at a future meeting of the committee.

During spirited committee debate, Rep. Pricey Harrison (D-Guilford) offered an amendment to eliminate the Daily Fantasy Sports gambling portion of the bill, but the amendment was defeated. Then, the committee was presented with a motion to give SB 929 a favorable report.

NC Family President John L. Rustin testified before the committee expressing deep concern over the impact such a massive expansion of online gambling could have on individuals, families and communities who become victimized by gambling addiction. “Online sports betting is a particularly addictive form of gambling, especially for children and young adults,” Rustin said in communications to committee members. “Decades of research show that gambling addiction results in higher rates of theft, embezzlement, bankruptcy, divorce, domestic violence, child abuse and even suicide.”

Rustin also addressed statements made by bill proponents that DFS gambling was already taking place in North Carolina and would go on unregulated if the bill did not pass. “It is not inevitable that Daily Fantasy Sports gambling will continue in North Carolina,” Rustin told the committee. “The websites of both FanDuel and DraftKings list nine states where they do not operate because the Attorney General has issued an opinion or state law categorizes Daily Fantasy Sports as illegal gambling.”

Rustin encouraged the committee to reconsider their position on Daily Fantasy Sports and said that since the Harrison amendment had been voted down that NC Family had no choice but to ask the committee to defeat the entire bill.
Although it failed to receive a favorable report, HB 929 still resides in the House Judiciary Committee and could be brought up again for consideration by the committee. For further updates, stay connected with NC Family via email updates, and on Facebook, Instagram and Twitter.

If you’re not sure why this is detrimental to our communities, Les Bernal makes a compelling case against legalizing online Daily Fantasy Sports in the Spring 2016 edition of Family North Carolina magazine in the article, “Daily Fantasy Sports: Is It Gambling?”