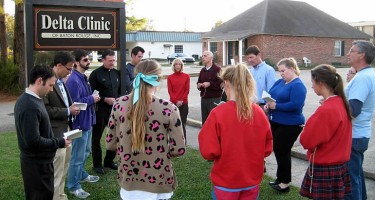 The annual 40 Days for Life campaign launches simultaneously in all 50 states for the first time ever on September 28! That means nearly half of the abortion centers operating in the United States will be surrounded with prayer during that time!

40 Days for Life events are not protests; they focus on prayer. Since 2007, hundreds of thousands of pro-life Americans have committed to the Biblically-significant 40 days of prayer, fasting, peaceful vigil, and community outreach to draw attention to the evil of abortion. That number is increasing each year and illustrates growing pro-life sentiment among Americans, especially in younger generations.

The 40 Days for Life movement lays claim to dramatic life-saving fruits over the last 10 years:

It’s not too late to be a part of this year’s campaign, which runs from September 28 to November 6 in a record-breaking 342 cities and 24 nations (at last count). Vigils are scheduled for at least five cities in North Carolina, including Asheville, Charlotte, Fayetteville, Raleigh, and Winston-Salem. To find the campaign closest to you and sign up, visit the 40 Days for Life website at 40daysforlife.com.