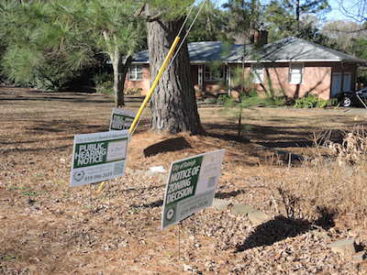 Your Choice Pregnancy Clinic was on the short end of a 3-2 vote this week on whether to allow the facility to operate on Jones Franklin Road in Raleigh next door to an abortion clinic. Hand of Hope Ministry purchased the residential property in 2015 and filed a rezoning application, similar to other businesses in the area. The house is sandwiched between two properties that had been residential but were rezoned for commercial use. Despite the fact that the Planning Commission gave a favorable recommendation, the Raleigh City Council initially denied the request and then reversed its decision.

The abortion clinic then filed a protest, and the case was heard Monday by the Raleigh Board of Adjustments. The Board ruled that “since A Hand of Hope serves women with free pregnancy tests and ultrasounds, they qualify as a medical facility rather than a civic organization,” according to Pregnancy Help News. The Board ultimately ruled that the center was a medical facility and the rezoning request was denied.

“Hand of Hope has made every effort to resolve our rezoning issue through city procedures and we have given the City of Raleigh every opportunity to do the right thing and allow us to occupy our space next door to the abortion clinic,” says Tonya Nelson, CEO of Hand of Hope Ministry. “Since they have chosen to not to do the right thing we will now seek relief at the federal level through the court system. We look forward to our day in court in the fight for the rights of the preborn.”

Your Choice is one of many pregnancy centers across the state seeking to offer women and men experiencing an unexpected pregnancy a real choice in their decision making process. Melinda Delahoyde, formerly with the national Care Net pregnancy network, told NC Family recently, “We would have to say that pregnancy centers are now the number one target of the abortion movement.”

“What the City of Raleigh has done to Hand of Hope, other left-leaning, politically-motivated municipalities are sure to follow,” warns Nelson. “What’s at stake here are our collective civil and religious liberties. The battle to truly give a voice to the voiceless just got a little bit louder in Raleigh,” she stated after the Monday ruling. The resource center’s next step is federal court.