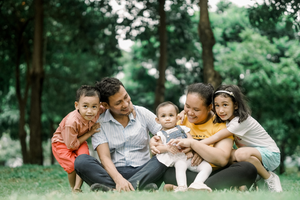 In early November, The Atlantic published a piece by Paul Bloom entitled, “What Becoming a Parent Really Does to Your Happiness.” Researchers have explored this question quite a lot, and, while there’s some variation depending on where you live, how much money you make, how old you are when you have children, and whether you’re a mom or a dad, the general pattern is pretty consistent—having children makes many parents less happy.

Yes, you read that right—parents sometimes experience a decrease in happiness following the birth of a child. They report feeling less happy spending time with their children than doing lots of other activities. Many married parents report less satisfaction with their marriages than before they had children. And none of this is limited to new parents. These effects can last for some until the children leave home.

When I first read the piece, the notion that kids make you less happy didn’t sit well. Everyone with whom I’ve discussed this article has had a similar reaction. But it actually sort of makes sense. Kids are wonderful, but they bring stress, they can cost a lot of money, and they can be the source of endless arguments about parenting. Kids put serious constraints on time and severely limit their parents’ freedom. Particularly when they’re young, they can cause sleep deprivation. They usually limit the option to work outside the home for at least one parent. For biological mothers, there’s post-partum depression and the physical struggles of pregnancy and breastfeeding. Children break things and disrupt the calm order that often existed in their parents’ homes before they came along. They leave less time for couples to spend with each other.

And yet, bizarrely, most parents also report that having children is the best decision they ever made. Very few people regret having children, while significant numbers want or wish they’d had more. As Paul Bloom, the article’s author, says,

…you genuinely prefer a world with your kids in it. This can put parents in the interesting predicament of desiring a state that doesn’t make them as happy as the alternative…The attachment we have to an individual can supersede an overall decrease in our quality of life, and so the love we usually have toward our children means that our choice to bring them into existence has value above and beyond whatever effect they have on our happiness.

So maybe there’s something that’s more important to us than happiness. Bloom goes on,

This is what I think is so completely fascinating about this research. We live in a society that seems to value happiness above all else. Ask parents what they want for their children, and almost all of them will say something like, “I just want them to be happy.” We talk about marriage and divorce in terms of happiness. We want jobs and workplaces where we’ll be happy. We largely make choices about relationships, careers, the use of our time, and even morality based on what maximizes happiness.

Yet this research would seem to suggest that there’s something deeper than that. Maybe a significant life is more important than a happy one. Maybe it’s meaning, not pleasure, that really matters in the end. And while Bloom’s article never mentioned the word “hope,” I wonder if that’s not part of the picture as well. Children, who almost always outlive their parents, provide some sort of hope for a future, for a legacy, that we won’t be forgotten, and that our lives will have a significance (a word Bloom does use a lot) that outlives us. After all, these same parents who report that they’re less happy, also say they wouldn’t change that. Meaning and significance trump happiness.