POV: Abortion, abortion for all! 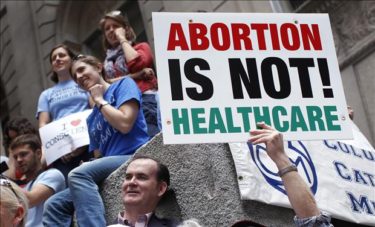 Apparently, putting our state into a tailspin by bitterly fighting to grant men the right to access women’s restrooms was not enough for some of our state’s legislators. Several lawmakers now believe this would be a good time to introduce an even more divisive bill that would make abortion legal at any point in a woman’s pregnancy. In addition, this proposal would allow abortions to be performed by any “healthcare provider operating within his or her scope of practice.”  This means abortionists would no longer need to be licensed physicians!

The measure entitled, Whole Woman’s Health Act, seeks to make abortion less of a hassle and far less regulated in North Carolina. The bill, filed simultaneously in the NC House and NC Senate, would also remove any required waiting period for abortion and eliminate any measure that would record the gestational age or even confirm that a woman is pregnant prior to receiving an abortion.

North Carolina law explicitly prohibits abortion after 20 weeks of pregnancy except in cases of a medical emergency, but this bill would completely remove that standard. It would also eliminate North Carolina’s informed consent waiting period, which addresses the fact that an abortion is completely different from any other medical procedure because it involves the action of a mother and father ending the life of their unborn child. While many individuals have profound regrets for making such a decision, a waiting period—with proper information provided—is advisable to allow more reasoned and clear-headed consideration of such a monumental decision.

Rep. Susan Fisher (D-Buncombe), one of the bill’s sponsors, explained her rationale for filing the bill at this time in the NC Insider:
“It is important that we have the conversation no matter what happens with this bill,” Fisher said, acknowledging the Republican-controlled General Assembly that expanded restrictions on abortions was unlikely to make a total 180-degree turn on the matter. “We are opening the door to a conversation by introducing this bill.”

Reflecting on the viciousness of “conversations” we had regarding bathroom access over the past year, I see no good that can come from a statewide “discussion” over making it more convenient for men and women to take the lives of their unborn children.