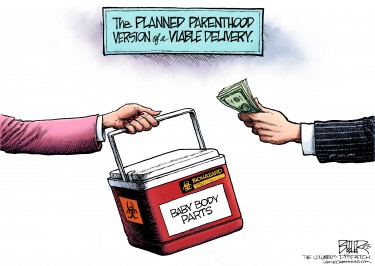 On September 29, Cecile Richards, the president of Planned Parenthood Federation of America, appeared before the United States House Oversight and Government Reform Committee in a feeble attempt to defend the indefensible—Planned Parenthood’s practice of harvesting and selling the butchered remains of unborn children whose lives have been snuffed out at its abortion clinics.

This gruesome reality was thrust into the national spotlight by a series of undercover videos released by the Center for Medical Progress (CMP), which had conducted a two-and-a-half year investigation into Planned Parenthood and its trafficking of organs and tissue from aborted babies. Ever since CMP began releasing video footage this summer, the American public has been so outraged by what it has seen that the U.S. Congress has launched no less than five different committee investigations into the activities of the nation’s largest abortion provider. State legislatures across the country have also responded with efforts to defund Planned Parenthood and to prohibit the sale of body parts from aborted babies.

Federal law already outlaws the sale of “human fetal tissue” for profit, and it prohibits abortionists from altering “the timing, method, or procedures used to terminate the pregnancy … solely for the purposes of obtaining the tissue.” But these restrictions are nearly impossible to police, especially within an enterprise that makes millions from killing innocent babies.

So what defense did Ms. Richards’ offer to the congressional committee? Ad Hominem, or the age-old strategy of attacking your opponent’s character when you are unable to effectively answer the arguments and claims made against you. In her testimony, Richards characterized the CMP videos as “deceptively edited,” “heavily doctored,” “sensationalized,” and part of an ongoing “smear campaign” against Planned Parenthood. These bogus claims came up short when the credibility of the video footage from the CMP’s undercover investigation was legitimized by an extensive forensics analysis contracted by our friends at Alliance Defending Freedom (ADF).

Ad Hominem was also part of the strategy employed by a handful of state legislators who chose to argue against a proposal in the North Carolina General Assembly to ban the sale of baby body parts in North Carolina and to prohibit the state from contracting with any service provider that conducts abortions.

Just like Ms. Richards’ attempts to discredit CMP, the arguments of these legislators fell flat. And, thankfully, on the same day Richards appeared before Congress, the North Carolina General Assembly ratified a bill that makes it a felony offense in the State of North Carolina to “sell the remains of an unborn child resulting from an abortion or a miscarriage,” and that ensures no state taxpayer dollars will be used to fund entities, like Planned Parenthood, that perform abortions.

At key times in our nation’s history, a confluence of circumstances have brought a heightened focus on an issue, like slavery and human trafficking, and it has stirred the heart of the American people to demand an end to such an abhorrent practice. I earnestly pray that these circumstances will be a turning point that results in an end, not only to the harvesting of baby body parts in our country, but to the killing of innocent unborn children!