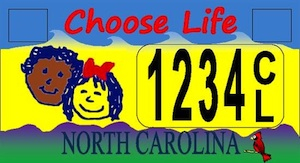 On June 29, the U.S. Supreme Court granted pro-lifers in North Carolina a major victory by vacating a lower court decision that has prevented the State from issuing “Choose Life” specialty license plates. The Supreme Court has ordered that the case of Berger v. ACLU of NC be reconsidered by the Fourth Circuit Court of Appeals, based on high court’s ruling earlier this month involving a Texas license plate measure.

The battle over North Carolina’s “Choose Life” specialty license plates began with a lawsuit from the ACLU of NC in 2011, just months after the General Assembly passed legislation authorizing the sale of 70 additional license plates, including the pro-life plates. The ACLU argued that the absence of a license plate expressing a “pro-choice” position on abortion represented “viewpoint discrimination” by the State. In December 2012, the U.S. District Court for the Eastern District of North Carolina agreed with the ACLU. A divided panel of the U.S. Court of Appeals for the Fourth Circuit upheld that ruling in February 2014, barring the State from issuing pro-life specialty license plates unless it also allowed pro-abortion plates. In July 2014, Alliance Defending Freedom (ADF) attorneys representing Senate President Pro Tempore Phil Berger (R–Rockingham) and then-House Speaker Thom Tillis (R–Mecklenburg) filed a petition with the Supreme Court, asking it to review the Fourth Circuit’s decision. ADF and the legislative leaders intervened in the “Choose Life” plates case after Attorney General Roy Cooper (D) refused to appeal the Fourth Circuit’s decision to the Supreme Court.

The high court’s June 29 order vacates the Fourth Circuit’s February 2014 decision and sends the case back to the appeals court for “further consideration” the Supreme Court’s June 18 decision in Walker v. Texas Div., Sons of Confederate Soldiers. According to ADF, “in Walker, the Supreme Court held that Texas’s license plate program constituted government speech, and that Texas therefore could reject plates with messages that contradicted the state’s public policy.”

Elon University School of Law Professor Scott Gaylord, an ADF-affiliated attorney who served as lead counsel in the North Carolina case, said in a statement, “Third parties like the ACLU cannot sanitize the public square of views a state communicates simply because they do not like those messages. As the Supreme Court made clear in Walker, the attempt to censor a message like North Carolina’s ‘Choose Life’ message is inconsistent with both the purpose of the First Amendment and the Supreme Court’s government speech precedents.”