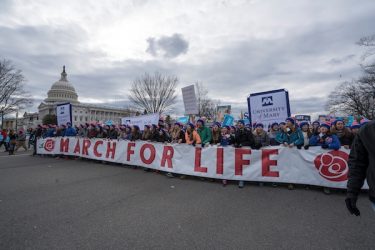 In an astounding vote on the 46th anniversary of Roe v. Wade, the New York legislature paved the way for abortions in the Empire State at practically any time up until the birth of the child and for almost any reason. The New York State Senate passed the Reproductive Health Act late in the evening on January 22, and Governor Andrew Cuomo quickly signed the bill into law.

This comes as much of the nation mourned the anniversary of the U.S. Supreme Court ruling in 1973 that forced the legalization of abortion on every state in the nation and has resulted in the deaths of an estimated 60 million children since that time.

Abortion laws in the State of New York were already among the most liberal in the nation. With this move, however, it will be legal for expectant mothers to abort their babies up until the birth of the child for a wide variety of reasons. The new law states that abortions are now legal when:

Even before this new law, over a third of all unborn children in New York City were aborted. The Centers for Disease Control and Prevention (CDC) reports that in 2015, there were 544 abortions for every 1,000 live births in NYC.

“How is it possible,” asks NC Family President John L. Rustin, “that a state in present-day America could have such blatant disregard for human life—especially the lives of the most vulnerable among us? This makes me and the staff here at NC Family even more determined to work to make North Carolina a safe place for unborn children, so that this travesty of justice is not repeated in our state.”

And indeed, in a quote in The Wall Street Journal following the vote, Leana Wen, President of Planned Parenthood Federation of America said they are taking the abortion fight to the states. “Courts can no longer be a reliable backstop to anti-reproductive health politicians. And because we don’t expect the attacks to stop, that is why we have to focus on states.”

A form of the Reproductive Health Act had been introduced many times in New York over the past 12 years but Republicans, who controlled the New York State Senate, had blocked it each time. In last fall’s election, however, Democrats added eight seats and now hold a solid majority in both chambers of the New York Legislature, and the Governor’s mansion. This enabled them to push through such a radical and wretched bill.

The move was a devastating blow to pro-life forces in New York. This bill “invites both women and men to view unborn children—their own unborn children—as disposable objects,” said Rev. Jason McGuire, Executive Director of New Yorkers for Constitutional Freedoms. McGuire views the passage of this bill as an occasion for mourning. “Our state needs a course correction—not just legislatively, but also morally and spiritually.”