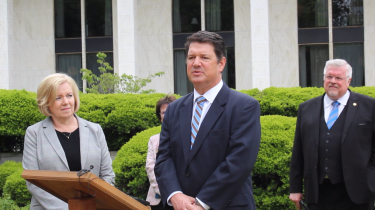 First, the Governor claimed that SB 359 is “an unnecessary interference between doctors and their patients.”

“The problem,” Rustin responded, “is that the abortionist does not see the unborn child, in this case the newborn child, as their patient. To the abortionist, that baby is the product of a failed medical procedure.”

Second, the Governor alleged that SB 359 would “criminalize doctors and other healthcare providers for a practice that simply does not exist.”

“If the practice simply does not exist, as the governor claims,” said Rustin, “how would it criminalize anything?”

Rustin pointed out reports from the U.S. Centers for Disease Control and Prevention indicating numerous cases where babies have been born alive after an abortion. “Groups representing over 30,000 physicians across our nation have called on our national leaders to pass this same legislation on the federal level,” so those opponents of SB 359 who argue that this bill is not scientifically sound and ignores medical reason, are wrong.

You can also Take a Stand for Life by visiting NC Family’s Action Center to email your legislators and urge them to override Governor Cooper’s senseless veto of SB 359.Thank you for joining with NC Family and our allies as we fight for the rights of unborn and newborn babies across our state!