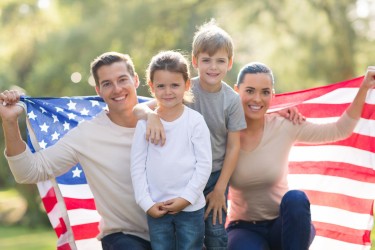 Several times recently, I have heard speakers refer to the family as the first and most important unit of government. I agree. The fundamental purpose of the family, which is created by marriage, is to provide a safe, secure and stable environment for the raising of children. The family is able to create that environment through a number of mechanisms which have their genesis in fundamental rights. These are the same rights enumerated in the Declaration of Independence and in the Constitution and Bill of Rights.

“Life, liberty, and the pursuit of property.” Presumably that is what one draft of Jefferson’s declaration of independence said. Property became “happiness” in the adopted version, but the idea remains. The possession of property, a place to live, whether it is owned or rented, enables a family to be secure physically. In that home, that place of security, reside the father, mother and children who constitute the model family.

Traditionally, the father was the breadwinner and went out into the world to bring back food, make a living, or whatever else you call it. The mother was in charge of the home environment, the care and feeding of the family and the children, and much more. Each partner operated within their realm of responsibility, using their own unique gifts and talents to accomplish the shared goal of serving the community and raising children to take their place as mature adults in society.

This model has been followed, more or less, for all recorded human history.

In recent decades, this model has been mocked by liberals, attacked by opponents, and maligned by government policies advocated by these two groups. Until just a couple of decades ago, very few were really standing up to defend the traditional family and the governmental structures that support the family. Times have changed, however, and now groups like the North Carolina Family Policy Council are at the forefront of the debate on many important issues.

It is readily apparent that many of the structures and programs built by government over the past 50 years cannot survive much longer. If elected officials refuse to take action now and make dramatic changes in some of the areas of government that are screaming for reform, then we will face a possible systemwide collapse.

The fundamental problem that lawmakers must address, is how to encourage the private sector to assume many of the responsibilities that government has assumed for itself over the past few decades. Many social services, once provided by churches and nonprofit agencies, are now the exclusive domain of government. In some cases, the services are provided by or paid for by government, while in others, the regulatory mechanism of government greatly restricts the private sector from making needed investments and starting programs and services that would benefit society.

I submit that as government leaders move forward with needed reforms, they look to the model of the family for their direction. From security to income, from education to health care, practices of the traditional family can help us to understand the proper form and function of government. One key to understanding is to realize that a good government system is designed to help the family where the family has reached the limit of its ability to help itself. In our current system, many families reach their limits much too quickly because the government is too eager to allow the family unit to dissolve; too eager to provide money payments which become a disincentive to work; and too controlling when it involves itself in the regulation of many areas that do not need government interference.

The student of history will see that God wants us to be students of His Word and His ways. He wants to develop His own character in our lives and for us to live according to His principles. He wants each member of our families to do the same and He wants our families to operate according to His plan. No less important, He expects government to fulfill its proper role and not to encroach, over-regulate, and destroy the freedoms He intends for us all.