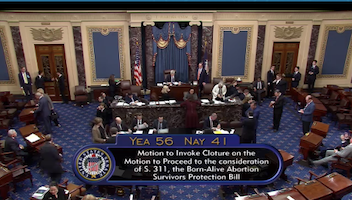 The U.S. Senate voted yesterday on whether to consider two bills that would protect the lives of innocent babies, both born and unborn. The “Born-Alive Abortion Survivors Protection Act,” and the “Pain-Capable Unborn Child Protection Act” were both blocked by procedural votes in the chamber.

According to U.S. Senate procedure, three-fifths of the chamber—or 60 members—must vote to approve a “cloture motion” if they want to bring a bill before the chamber and limit debate, thus avoiding a filibuster by the bill’s opponents. Although the GOP majority in the Senate had the votes to pass these life-saving bills by a simple majority, they were unable to muster the votes necessary to approve the three-fifths cloture motion and limit the debate.

With a vote of 56-41, the cloture motion on S.311—Born-Alive Abortion Survivors Protection Act failed, although it received support from all Senate Republicans and three Democrats: Bob Casey of Pennsylvania, Doug Jones of Alabama, and Joe Manchin of West Virginia. As we shared in a recent story, this common sense bill would protect babies that survive failed abortion attempts and are born alive. “Every one of us should be able to say without any hesitation, ‘Leaving babies to die is unacceptable,’” said bill sponsor Sen. Ben Sasse (R-Nebraska).

The cloture motion on S.3275—Pain-Capable Unborn Child Protection Act also failed by a vote of 53-44, with Sens. Casey and Manchin voting “Yes,” and Republican Sens. Susan Collins of Maine and Lisa Murkowski of Alaska voting “No.” This bill would prevent abortions after 20 weeks of pregnancy. Bill sponsor Sen. Lindsay Graham (R-South Carolina) addressed his colleagues before the vote on the cloture motion occurred. “There are only seven countries that allow wholesale abortions at the 20-week period,” he said, “including China and North Korea. The United States should not be in that club.”

“The disappointing votes on these two important bills will not deter us from continuing to fight to protect and defend the unborn,” said Sen. Cindy Hyde-Smith (R-Mississippi) in a statement. Sen. Hyde-Smith was an original cosponsor on both life bills. “We will continue to press for pro-life policies, including laws that mandate medical care for babies who survive an abortion and that prohibit elective abortions after 20 weeks.”