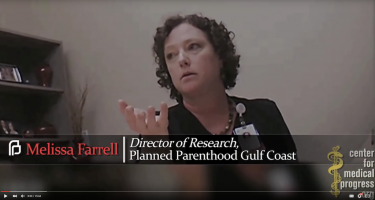 In a shocking turn of events, a grand jury in Houston, Texas investigating whether a Planned Parenthood clinic attempted to sell the body parts of aborted babies, has instead indicted the team of undercover videographers that exposed what has been happening. David Daleiden, Director of the Center for Medical Progress (CMP), could face up to 20 years in prison if convicted on charges of attempting to buy baby body parts and tampering with a government record. A 62-year-old staffer was also indicted in connection with the government record. Details about the tampering charge were not released.

In a statement posted on their website, CMP Director David Daleiden responded that CMP uses “the same undercover techniques that investigative journalists have used for decades in exercising our First Amendment rights to freedom of speech and of the press, and follows all applicable laws.” And he further said, “Planned Parenthood still cannot deny the admissions from their leadership about fetal organ sales captured on video for all the world to see.”

The Texas grand jury that handed down the indictment on January 25 was looking into allegations that Planned Parenthood was profiting from the sale of body parts from aborted babies, which is a federal crime. It’s also against the law to alter the abortion process in any way to obtain intact specimens for research. That law is designed to protect the health of the woman receiving the abortion. This CMP undercover video, featuring Texas Planned Parenthood staff and former staff, is a clear example of the kinds of evidence that has piled up against Planned Parenthood in recent months. Full, unedited versions of the videos are available on the CMP website.

“The hours and hours of unedited video footage produced by the Center for Medical Progress has clearly exposed what appears to be the inhumane practices of Planned Parenthood to harvest and sell the body parts of defenseless and innocent human babies,” said NC Family President John L. Rustin. “Neither indictments, nor fiery rhetoric from abortion industry executives can ever make us ‘unsee’ the horror of what takes place in Planned Parenthood clinics around the country. Accordingly, we should harden our resolve to strip Planned Parenthood of the millions of dollars in taxpayer funding it uses to run a business that kills hundreds of thousands of unborn babies every year.”

Despite the fact that the Texas grand jury refused to indict Planned Parenthood Gulf Coast, this is certainly not the final word on possible findings against Planned Parenthood. Several other investigations are ongoing at the state and federal levels. In an op-ed, which appeared in the USA Today on January 25, Daleiden wrote, “The truth will continue to come out through the congressional probe [and] through the ongoing state investigations.”