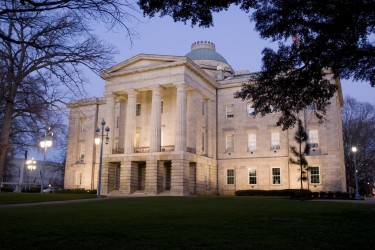 On Wednesday May 16, legislators return to Raleigh to convene the traditional 2012 Short Session of the General Assembly, just one week after North Carolinians will head to the polls to cast their ballots in the May 8 Primary Election. In many ways, the events of May 8 will serve to set the stage and the mood of the 2012 short session. Decisions made by voters in the primary will decide which candidates will make it to the General Election ballot on November 6, as well as whether the State Constitution will be amended to protect the institution of marriage as the union between one man and one woman. The latter would make North Carolina the 31st state to protect marriage through the State Constitution.

The business eligible for consideration during the Legislative Short Session is limited. The General Assembly will be primarily concerned with adjusting the biennial budget passed last year. Among the other items eligible for consideration are: amendments to the State Constitution; bills that already passed either the House or Senate in 2011; bills recommended by a variety of committees and commissions that have been meeting during the interim; local bills; appointments to fill vacancies on State boards and commissions; bills related to State or local pension or retirement systems; bills related to the revised voting districts or election laws; and bills vetoed by the Governor. However, there are strategic maneuvers available to allow the General Assembly to consider nearly any topic or bill it wants. Still, the leadership of both the House and Senate have indicated an intention to take the session’s name seriously, and focus nearly exclusively on any necessary budget adjustments in as little time as possible, and be home in time to enjoy the last vestiges of summer.

In many ways, the 2011 Long Session was an historic and unprecedented legislative session for the General Assembly. During the last election cycle in 2010, Republicans won majorities in both chambers of the State legislature for the first time in over a century. That historic victory caused the political equivalent of a 180-degree turn, as the new Republican leadership set out with an ambitious agenda that they will seek to continue in the Short Session.

Redistricting. While change is guaranteed in every election cycle, the 2012 elections are already proving to bring a tremendous shift, due in large part to new district lines for congressional and state legislative seats that were redrawn as part of the redistricting process that is mandated by the census every 10 years. Lawmakers approved the maps in July 2011, and, though legal challenges were filed to contest the maps, they received pre-clearance from the Department of Justice in November. A threejudge panel appointed by North Carolina Supreme Court Chief Justice, Sarah Parker, ruled in January that a majority of the cases’ challenges to the maps can continue. Should the legal proceedings challenging the constitutionality of the maps gain headway and result in a requirement that the maps be adjusted, the General Assembly could potentially take up the process of amending the maps during the Short Session, or reconvene again later to do so. Notably, in their January 20 decision, the Superior Court judges hearing the challenges declined to postpone the primary elections pending the outcome of the case, meaning that North Carolina voters will go to the polls on May 8, 2012 to vote on the Marriage Protection Amendment as well as to choose the candidates who will continue into the general election contests, regardless of whether the maps are ultimately upheld.

Retirements. Apart from changing district lines and the normal turnover common in any election cycle, there will be quite a number of changes due to resignations and retirements. There are 27 current members of the 170-member General Assembly who have announced that they will not be running for re-election, and an additional seven current members have announced that they will forgo running for re-election to the General Assembly in order to seek higher office. Also, several current members of the House have chosen to run for seats in the Senate.

Perhaps the most surprising announcement, however, came from someone outside of the General Assembly altogether—the January 26 announcement from Governor Beverly Perdue that she would not seek a second term. As might be expected, that announcement is certain to significantly change the dynamics between the Legislature and Governor Perdue, who by not running for re-election, classifies as a “lame duck” governor. During the 2011 Long Session, the Governor and the legislative leadership had a contentious relationship, made evident by the Governor’s veto of 16 bills and the legislature’s action to override seven of those, including a fiercely contested budget.

Governor Beverly Perdue’s veto of the Legislature’s budget proposal last summer marked the first gubernatorial budget veto in the State’s history. In an effort to uphold their campaign promise to balance the budget without raising taxes, Republicans were adamant in their opposition to tax increase proposals, including Governor Perdue’s proposal to extend a half-percent increase to the state sales tax. Although the half-percent sales tax increase was passed as a temporary increase during the previous legislative session, Governor Perdue tried to foster public support for maintaining the increase to prevent budget cuts. Republican leaders, however, rejected the increase and were able to override her veto and enact the budget as passed by the General Assembly without any tax increases.

Governor Perdue has indicated plans to include another attempt at a sales tax increase in the budget she will propose for consideration in the Short Session. Legislative leadership continues to maintain strong opposition to any tax increases in 2012. Because the budget passed in 2011 is for the biennium, even if the General Assembly and Governor end up in another budget battle resulting in a veto without the necessary votes to override that veto, the State will continue to operate under a budget—the budget as passed in 2011 without any adjustments in light of actual, rather than projected, revenue and expenditure levels.

As usual, there is never certainty as to what the General Assembly will take up in a given session. Among the more interesting bills that remain eligible for consideration this year are:

Some, none, or all of these could be considered, along with the remaining list of vetoed bills that have not been considered for override votes. These vetoed bills include:

Another issue that may arise during the Short Session is the expansion of gambling in North Carolina, particularly on the Cherokee Indian Reservation in the Western part of the State. Back in November, Governor Perdue signed a new 30- year compact with the Eastern Band of Cherokee Indians that would allow Las Vegas style gambling at their casino and possibly open the door for more casinos across North Carolina. However, because the compact would allow types of gambling that are currently illegal in North Carolina, the General Assembly would need to amend the law to allow casino-style games in order for the compact to go into effect. Little has been heard on the topic since the initial push to get the compact approved in the fall, but be on the lookout for gambling advocates to couch its expansion in terms of dreams for a quick fix to the State’s unemployment and budget woes.

A special legislative committee has been meeting during the General Assembly’s interim to consider a variety of immigration issues. While it looks as though the most contentious issue—a comprehensive adjustment to the State’s policies related to undocumented and illegal residents—the possibility remains that more targeted changes to the State’s immigration policy may be considered. Namely, the House has already passed a bill that prohibits foreign consular documents from being considered as acceptable identification papers. Additionally, the Senate has already passed a bill aimed at reinforcing the current state law prohibiting illegal immigrants from being eligible for government benefits.

Notably, the House tried and failed to override a gubernatorial veto of a bill that would require voters to show a photo ID before voting. HB 351—Restore Confidence in Government failed to muster a three-fifths majority vote on an override motion in the House late last summer. It is possible that a veto override may be attempted again at some point during the Short Session.

With all the uncertainty in the air, one thing is for sure—Jones Street is about to get a whole lot busier! Between legislators, their staffs, lobbyists, and activists, there is sure to be the expected, though not entirely predictable, hum and hustle and bustle of activity. There is lots of work to be done, and you can be sure that the North Carolina Family Policy Council will continue to be a strong and consistent voice for sound public policy that benefits, strengthens, and protects North Carolina families for much longer than one Short Session of the General Assembly.

Brittany Farrell is assistant director of policy for the North Carolina Family Policy Council and editor of Family North Carolina.