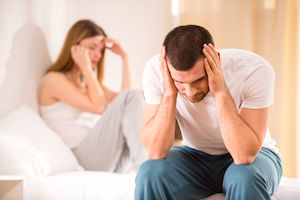 Recently I saw an announcement on Facebook that caught my eye due to both the content and the phrasing. My friend announced to the world that the amazing guy who’d been just a casual friend a year ago was about to move in with her. She’d been pleasantly surprised by the turn their relationship had taken. Her language was a lot like a typical social media engagement announcement, most of which read something like, “A year ago he asked me to coffee. Who’d have thought that a year later he’d be asking me to marry him?!” Although there was no mention of marriage in this instance, dozens of people quickly responded with excitement and congratulations. “Isn’t love wonderful!”

The enormous social shift regarding cohabitation, or living together outside of marriage, can be seen by looking at U.S. Census Bureau data over the past 50 years. In 1968, 0.1 percent of adults aged 18-24 and 0.2 percent of those aged 25-34 lived with a partner. By 2018, that had increased dramatically, with 9.4 percent of 18-24 year olds and 14.8 percent of 25-34 year olds living with partners. Overall, in “2018, there were 8.5 million unmarried, opposite-sex couples living together in the United States.”

I suspect that living together before marriage has become so completely normalized among some that many people feel it’s a little different than, but pretty similar to, marriage itself. It’s certainly regarded socially, if not legally, as almost equivalent. Thus the wording, and general acceptance, of my friend’s social media announcement.

But is it actually the same? The evidence seems pretty clear that it’s not.

First of all, there are the relationship survival rates. According to a study published last year in the Journal of Marriage and Family, people who live together first have slightly lower break-up rates in the first year of marriage, 3.9 percent for those who cohabitated versus 4.1 percent for those who didn’t. (Divorce takes time, so these are mostly separation, rather than divorce rates.) However, after the first year, and for every year thereafter, the effect is reversed. People who live together before getting married have significantly higher separation and divorce rates than people who don’t.

It’s even more interesting than that, though. Not only are divorce rates higher among those who cohabit, but they’re also higher among people with more sexual partners before marriage. Having even one pre-marital sexual partner is correlated with an increased divorce rate in the first five years, from 5 percent to 20 percent.

Of course, many would argue that it’s not just divorce rates that are important, but whether those marriages are happy. Interestingly, the effects are seen there, too. There’s a big drop in marriage satisfaction between those who have only ever had sex with their spouses and those who had sexual partners prior to marriage. Generally, the more premarital sexual partners, the lower the rates of satisfaction in marriage.

So despite the fact that premarital sex and cohabitation are becoming more culturally acceptable, we should continue to push back. To those who aren’t married; take heart and resist the temptation to succumb to social norms. To those who are parents, grandparents, pastors and mentors, let’s resolve to continue teaching our children that they’re better off not living together and refraining from sex before they get married for a long list of reasons. It should come as no surprise to Christians that there are benefits to following a biblical plan for marriage. As in so many areas of our lives, following God’s design often results in immense blessing!