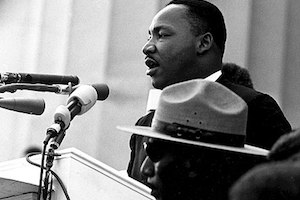 Christian leaders gathering for the #MLK50 Conference in Memphis, Tennessee are honoring the memory of Dr. Martin Luther King, Jr. by announcing $1.5 million worth of scholarships to 20 Christian colleges, Bible colleges, and seminaries designated for minorities in the Memphis area. The announcement was made in Memphis this morning at the #MLK50: Gospel Reflections from the Mountaintop Conference, jointly hosted by The Gospel Coalition and Southern Baptist Ethics and Religious Liberty Commission (ERLC). Today is the 50th anniversary of the assassination of Dr. King in Memphis.

Phillip Bethancourt, Executive Vice President of the ERLC said, “We hope this is just a start” and expressed a desire that other cities and churches would step forward to offer similar scholarships in their own communities.

Speaking just after the announcement, Jason Cook, Associate Pastor at Fellowship Memphis church said the scholarship fund arose after extensive discussions among black and white leaders regarding how Christians can “pursue racial unity in the midst of tremendous tension.”

“What began as a dream is standing here with the potential to transform not just individuals, but generations,” said Cook. “As a pastor in Memphis, I do not proclaim to speak on behalf of all the pastors in Memphis. But what I can tell you is that when I have sat with many, many, many pastors, their response to this has been “Yes” and “Amen.”  But they would also acknowledge that this is but the first of small but meaningful gestures that our white brothers and sisters and institutions can take in the direction of those who might be benefited from the resources they possess. So as a pastor here, I am thrilled. I am overjoyed.”

ERLC President Russell Moore kicked off the conference yesterday by reminding Christians and Christian institutions that we were—and often still are—guilty of ignoring or outright endorsing racism, even today. “If [a pastor] stands up and begins to speak to the depth of the sin and the wickedness and the injustice that is present in issues of racism, there are going to be some who say, ‘Why don’t you stick to preaching the Gospel?’ and ‘Why are you speaking to something that is “social” or “political?”’ Brothers and sisters, you should recognize that, because that is the response that will come in some way or other when you preach about any sin!”

Speakers continue through tonight at the #MLK50 Conference. You can live stream the event here or watch recordings on ERLC’s Facebook page.