Coming to Raleigh and Charlotte! National Day of Mourning For Millions of Unborn Black Lives 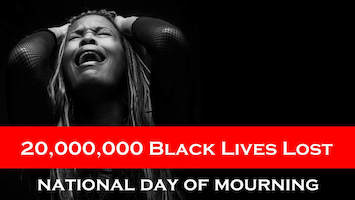 An estimated 20,000,000 Black lives have been lost to abortionin the United States. According to Catherine Davis of The Restoration Project, “Planned Parenthood has long targeted Black babies and women under their plan of extermination called The Negro Project.” In fact, “79% of [their] surgical facilities are located within a two-mile radius of Black and Latino neighborhoods.” The pro-abortion organization does not have plans to stop anytime soon, as Planned Parenthood is constructing three new mega abortion centers—10,000 square feet or larger—in Black neighborhoods in Richmond, VA, Charlotte, NC, and Birmingham, AL.

To protest this continued attack on Black lives, and to mourn the loss of millions and millions more, African American pro-life leaders from Civil Rights for the Unborn, the Douglass Leadership Institute, and The Restoration Project are hosting the National Day of Mourning this Friday and Saturday, August 30 and 31, 2019.

But this is not a single rally or protest. These pro-life advocates will lead a “March-on-Selma-style” bus processional beginning on August 30, from Mount Olivet Church in Richmond, Virginia, continuing through to Raleigh, Charlotte, Atlanta, and finishing in Birmingham with a rally and prayer meeting on Saturday.

This is an opportunity for local churches, communities, and activists to stand in solidarity with our brothers and sisters as witnesses against a culture of death that targets them. Supporters can join the processional at any of the cities listed:

A full schedule of events can be found on the National Day of Mourning website. If you are unable to attend the National Day of Mourning, NC Family encourages you to join thousands of others nationwide in prayer for those participating in the processional, for our African American pro-life leaders, and for the communities that have continually been targeted by the abortion industry.