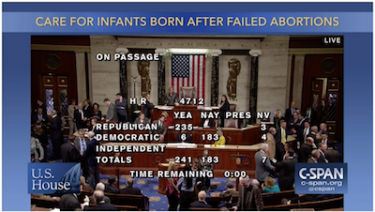 On the same day that pro-life citizens from across the United States are gathering in the nation’s capital for the 2018 March for Life, the U.S. House has passed a measure designed to protect babies who are born alive following a failed abortion attempt. The vote was 241 to 183.

“That we would even need a bill to protect the lives of innocent children born alive after a botched abortion is horrific,” said NC Family President John L. Rustin. “One has to wonder what those who voted against this bill would recommend abortion providers do for this child, who has already overcome great odds to be born alive into our world. Nonetheless, we applaud the members of the U.S. House who voted for the passage of this important, but tragically necessary, pro-life measure.”

HR 4712–Born-Alive Abortion Survivors Protection Act, which passed the House this morning, requires any health care practitioner who is present at the time a child is born alive following an attempted abortion to “exercise the same degree of professional skill, care, and diligence to preserve the life and health of the child as a reasonably diligent and conscientious health care practitioner would render to any other child born alive at the same gestational age.” The bill also requires that a child born alive following a failed abortion is immediately transported and admitted to a hospital. According to the bill, any health care practitioner who fails to abide by these standards would be subject to criminal fines, up to five years in prison, or both.

Six Democrats joined with 235 Republicans to secure passage of the measure. The bill now goes to the U.S. Senate for consideration.