A Time to Say “Thank You and Stand Firm for Life!” 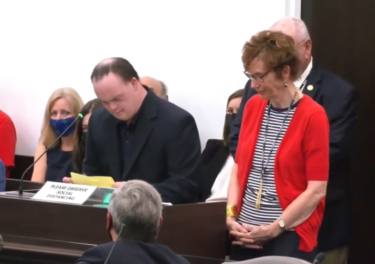 The North Carolina House recently approved a bill that would prohibit a physician from performing an abortion in North Carolina if they know the abortion is being sought because of the race or sex of the unborn child or because of a diagnosis of Down syndrome. The parents of children with Down syndrome who testified in committees, and especially those individuals themselves, like Will Delahoyde (pictured left), won the day—and the hearts and minds of many legislators.

Sadly, but not surprisingly, Planned Parenthood, NARAL, the ACLU, and their abortion allies attempted to block this life-affirming, life-saving bill at every opportunity. Nonetheless, HB 453—Human Life Nondiscrimination Act/No Eugenics passed the House on a bipartisan vote of 67-42, and this is significant!

Last session, Governor Roy Cooper wrongly vetoed a bill that would require a health care practitioner who is present at the time a child survives a failed abortion attempt to give aid to that child and ensure that the newborn is transported to a nearby hospital for care. While we pray the Governor will have a change of heart this year, recent history does not bode well for HB 453 receiving his signature instead of a  “VETO” stamp.

That is why it is critically important that we say “Thank You” to those who supported HB 453, especially the six Democrats who stood against their party’s pro-abortion platform and voted in favor of HB 453 and in favor of life!

Of course, House Bill 453 has to be approved by the State Senate before it gets to the Governor’s desk, but these members need to hear from you NOW!