Our keynote speaker for this event will be Coach Joseph Kennedy.

Coach Joseph Kennedy, an eighteen-year Marine veteran, was an assistant coach for the Bremerton High School (BHS) varsity football team. Before he even coached his first game, the Marine-turned-football coach made a commitment to God that he would give thanks at the conclusion of each game for what the players had accomplished and for the opportunity to be part of their lives through football. 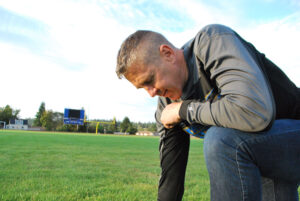 After the whistle of his very first football game in 2008, Coach Kennedy took a knee and quietly prayed, thanking God for his players. His quiet, private prayers lasted only 15-30 seconds. Coach Kennedy continued this practice after every game for seven years.

In 2015, school officials at BHS suspended—and later fired—Coach Kennedy because of his brief, post-game prayer. First Liberty Institute filed a lawsuit against the school district, arguing that banning coaches from quietly praying, just because they can be seen by the public, is wrong and violates the Constitution. The U.S. District Court for the Western District of Washington, and then the U.S. Court of Appeals for the Ninth Circuit, sided with the school district. First Liberty appealed the case to the U.S. Supreme Court. In January 2022, the Supreme Court agreed to hear the case.

In a 6-3 decision, the U.S. Supreme Court upheld the right of Coach Joe Kennedy to take a knee in quiet prayer after football games even if he can be seen by students and the general public. This decision respected the Constitutional rights of all public-school teachers and coaches to engage in a brief, personal prayer in public.

Register as a Sponsor for NC Family’s 2022 Charlotte Dinner