2017 Greenville Dinner with The Benham Brothers 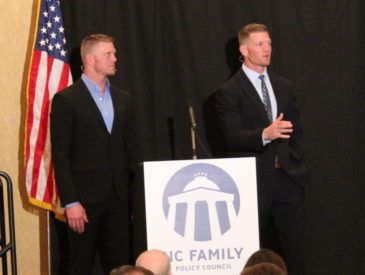 NC Family’s 2017 Annual Major Speakers Dinner in Greenville, NC on Monday, March 13, 2017 featured David and Jason Benham—The Benham Brothers—who found themselves on the cusp of the culture wars when HGTV cancelled their home improvement television show due to their support of traditional marriage and the sanctity of human life.

Click the video below to watch The Benham Brothers address at NC Family’s 2017 Greenville Dinner.

The Benham Brothers
You may know twins David and Jason Benham for their courageous role in speaking out on critical family policy issues across the nation. These two former professional baseball players first caught our attention when their TV show, Flip It Forward, was abruptly cancelled by HGTV because they expressed their religious beliefs regarding right to life and traditional marriage. David and Jason have written two books: Whatever the Cost and Living Among Lions, and they are dynamic communicators.