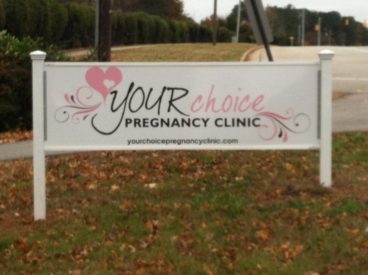 Hand of Hope Pregnancy Centers may soon be allowed to open a fully operating center next door to an abortion clinic, after reaching an agreement with the City of Raleigh. This comes after nearly four years of legal wrangling, which ultimately led to Hand of Hope filing a federal lawsuit against the City. This is a big step forward, but there are still a few hurdles to clear before the center can begin full operation at that location.

Hand of Hope bought property in Raleigh in 2015. It was zoned residential but other properties on Jones Franklin Road, including the adjacent abortion clinic, “were purchased as residential properties and rezoned for Mixed Use or similar zoning uses.” But when Hand of Hope applied to the City of Raleigh to rezone just as these other properties had, they were denied. While Hand of Hope was allowed to open the center in September 2017, it was not permitted to “operate its ultrasound machine or offer STD testing at the new facility.”

After repeated attempts to reach an agreement, Hand of Hope filed a federal lawsuit against the City of Raleigh in July 2017. As NC Family shared in a story on this development, “The suit specifically points to violations of Hand of Hope’s First Amendment rights to religious expression; the recognized Constitutional right of women to acquire useful knowledge about pregnancy; and the Constitutional right of equal protection under the law by treating Hand of Hope’s use of the property differently from ‘similarly situated organizations…based upon their religious convictions or viewpoints on abortion.’”

Under the recent settlement agreement, Hand of Hope will be able to fully operate this pregnancy center without unjust restrictions. This will include giving free ultrasounds, free pregnancy and STD tests, abortion pill reversal information and medication, and Life Skills education. The settlement still has to be approved by the Board of Adjustment before everything is resolved, so Hand of Hope Founder and CEO Tonya Baker Nelson says she would appreciate continuing prayers.

“More times than I can count, I was intimidated along the way,” said Nelson. “But I never wanted to quit, because at the end of the day, if that was my daughter walking into that abortion clinic, I’d want somebody who’s not going to give up the fight for her.”

We hope you will join NC Family in praying for Nelson and her whole team at Hand of Hope as they conclude this four-year-long fight to serve the needs of pregnant women and unborn children in our Capital city.