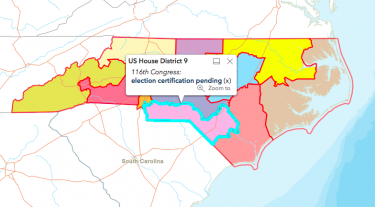 The 116th Congress of the United States has been in session for one week, but the constituents of North Carolina’s 9th Congressional District still have no representation in the U.S. House. The race for this seat remains steeped in controversy, despite the fact that Republican Mark Harris, former Pastor of First Baptist Church, Charlotte, continues to lead Democratic challenger Dan McCready by over 900 votes. Complicating matters is the fact that the North Carolina State Board of Elections was dissolved by a court order at the end of December. In the absence of a State Board to certify the election or to take other action, it could be months before the 9th District has representation in our nation’s capitol. Many have speculated that a new general election, and possibly even a new primary election, may be required before this seat is filled.

In the attached video of the U.S. House convening session last week, you can watch (following the prayer and the Pledge of Allegiance) as Karen Haas, Clerk of the U.S. House, announces that the 9th District of North Carolina is the only seat in the 116th Congress that has yet to be certified (found at the 3:45 minute mark).

Recently, the NC FreeEnterprise Foundation released a comprehensive review of much of the activity surrounding North Carolina’s 9th District as well as the legal, legislative and other actions that have left the state without a State Board of Elections.

Please join NC Family as we continue to pray for a quick, equitable and fair resolution to these issues.