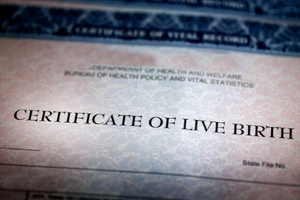 Lambda Legal, a national LGBTQ activist organization, is suing the State of North Carolina over what it characterizes as a “discriminatory policy” relating to birth certificates. Consistent with biology, history, and longstanding policy, current state law requires birth certificates in North Carolina to identify a child as either “male” or “female.” In 1975, the state modified the law to allow an individual to change the sex designation on his or her birth certificate if they file a written request with the State Registrar and provide a notarized statement from a licensed physician that they have undergone sex reassignment surgery.

In its complaint, Lambda Legal asks the federal district court to throw out the 1975 accommodation as unconstitutional, and simply allow transgender identifying persons to change the sex designations on their birth certificates upon request.

To understand the significance of this legal action, it is important to understand the difference between “sex” and “gender.” “Sex” is rooted in genetics and biology, and is determined by reproductive organs and structures. “Gender,” on the other hand, is defined by Merriam-Webster.com as “the behavioral, cultural, or psychological traits typically associated with one sex.” Gender identity is self-defined and can be fluid and change at any time.

What Lambda Legal is asking the federal courts to do is to change a fundamental defining characteristic on the most basic of governmental documents from one that is rooted in biology to one rooted in psychology; they want to trade genetics for self-identified and fluid personal preference. In essence, this change would eliminate any real recognition of the difference between male and female, girls and boys, and men and women.

The Lambda complaint claims that “gender identity—a person’s core internal sense of their own gender—is the primary factor in determining a person’s sex. Every person has a gender identity, and that gender identity is the critical determinant of a person’s sex, including for transgender people whose sex-related characteristics are not in typical alignment.”

If this is the case, then there may be no basis at all—in fact it could be unconstitutional and therefore unlawful—for the state to differentiate in any way, shape, or form between male and female. We already see the manifestation of this in transgender identifying biological males competing on girls’ sports teams and using female bathroom and changing rooms, for example.

Ultimately, the effort to remove any distinction between male and female runs up against the Biblical creation story itself: “So God created man in His own image, in the image of God He created him; male and female He created them.” (Genesis 1:27) And we wonder why there is such an inherent conflict between the redefinition of the word “sex” and the rights of all citizens to live according to their deeply held religious beliefs.

While this lawsuit may appear on the surface to be of minimal consequence, the ramifications of what the courts decide could be monumental.