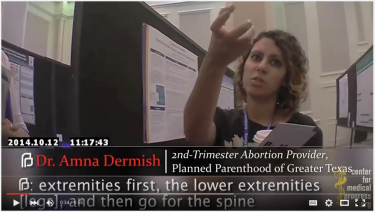 This week, The Center for Medical Progress (CMP) released a new undercover video that provides further evidence that Planned Parenthood abortionists illegally alter abortion procedures to extract the most intact unborn baby parts to sell for fetal tissue research. The 11th video from CMP’s investigation shows a Planned Parenthood abortionist from Texas describing how she uses ultrasound technology to turn a second-trimester baby to a breech position to make it easier to harvest intact body parts—an act that appears to be in violation of the federal partial-birth abortion ban.

“My aim is usually to get the specimens out pretty intact,” Dr. Amna Dermish, a late-term abortionist for Planned Parenthood in Austin, Texas, says in the CMP video. “Especially the 20-weekers are a lot harder versus the 18-weekers, so at that point I’ll switch to breech,” she says. “I try to always keep the trunk intact just by function of always trying to aim for the spine to try and bring it down.”

In a press release, CMP contends that, “[Dr.] Dermish does not use the chemical digoxin to kill the fetus before 20 weeks, so her feet-first, intact extraction abortions are done on living fetuses.” This would be in violation of the federal partial-birth abortion ban, which prohibits abortion procedures where “in the case of breech presentation, any part of the fetal trunk past the navel is outside the body of the mother, for the purpose of performing an overt act that the person knows will kill the partially delivered living fetus.”

“As congressional and state-level investigations of Planned Parenthood’s fetal tissue harvesting and sale practices continue, it is vitally important that pro-life citizens stand against the atrocities of Planned Parenthood by sharing the information in these CMP videos,” said John L. Rustin, president of NC Family. “It is time to hold Planned Parenthood accountable and end all taxpayer funding of the nation’s abortion giant.”